Paris. Frankreich. In our interview with Parisian architect and urban planner Jacques Ferrier he explains, why he created the Sensual City Studio (SCS), his humanistic vision for the cities of the future and why he likes the Parisian suburbs and Shanghai. 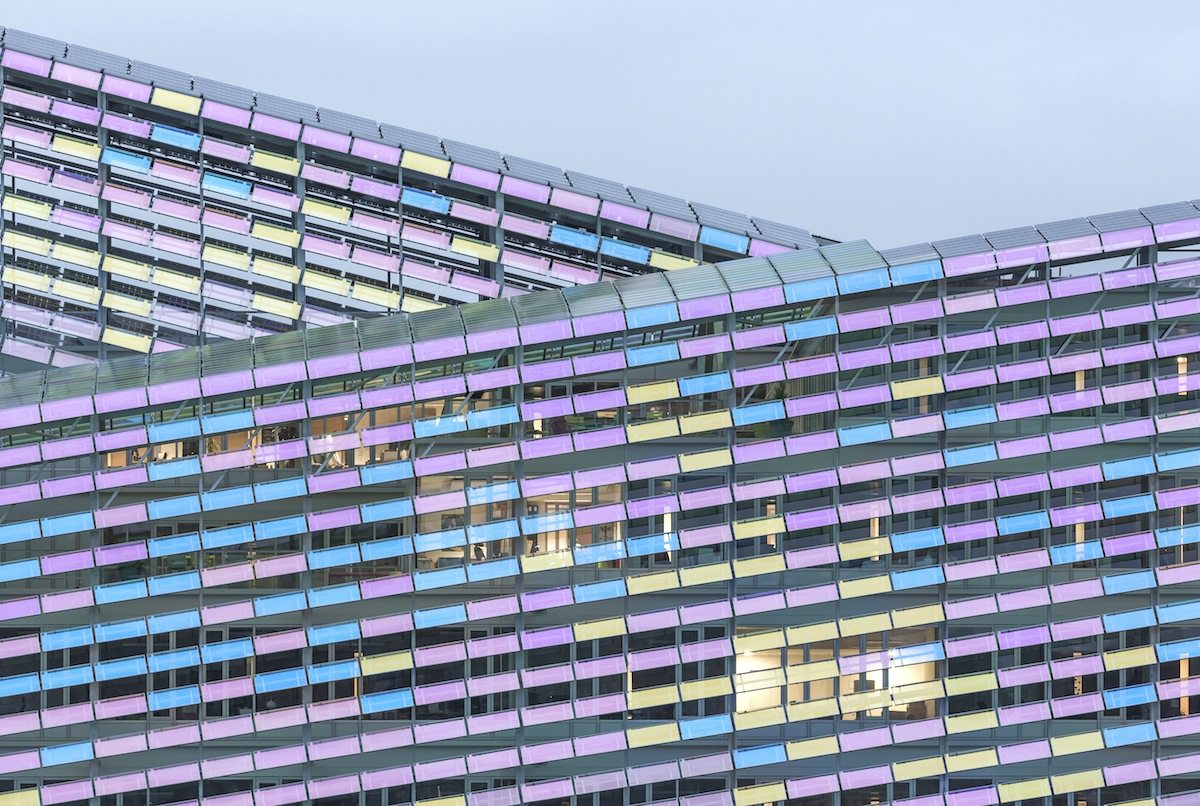 "With the Sensual City, our intention is to develop an alternative approach, one in which technology is not obtrusive nor an end in itself."

1. Please describe the philosophy and methodology of your work and your practise Jacques Ferrier Architecture (JFA).

I have developed a highly individual approach to architecture, rejecting the strictly formalist approach of the Modernists and instead embracing technology to improve the relationship between people and their environment. Central to my work is the idea of a sensual city – a desire, that all buildings should respond and contribute to the sensory experiences that make us human. I design and monitor all projects for JFA in collaboration with Pauline Marchetti, who also works in the Sensual City Studio (SCS), which is an independent studio dedicated to research and experimentation.

2. The headquarters of Métropole Rouen Normandie was opened in July 2017. What is its concept and idea?

The headquarters of Métropole Rouen Normandie is a unique, memorable and fitting image on the banks of the Seine in Rouen. What makes it so unique is how the new building fits in with the surrounding landscape. The building’s dynamic profile contrasts with the omnipresence of horizontal designs found along the major port, while its silhouette echoes the renovated industrial buildings on the right bank. The oblique shapes are reminiscent of the silhouettes of cranes and other objects in the port and the bows of the passing ships. The building showcases and utilises the site’s strong presence to enhance urban life on the left bank. As an extension of the future park, the building is the figurehead of the future eco-district. It is a contemporary metropolitan icon, but already forms part of the surroundings, much like the cathedral and the Gustave Flaubert bridge. It blends in with the unique visual landscape of the quays and the history of the port.
Its multi-faceted, transparent architecture plays with the changing light of the Normandy sky, reflections from the water, and the colours of the climate. The building is covered with fish-like 'scales' made of subtly coloured glass. Reflecting and refracting the light of the sun, the glass scales cover the building with hints of colour that are further enhanced by the reflections from the river below. The effect is inspired by impressionist painting, and in particular Claude Monet. The glass is covered with a layer of metal oxide creating a colourful iridescent reflection from the outside, but disappearing on the inside leaving the light in work areas unaffected. These changing colours are a contemporary interpretation of the chromatic variations in Claude Monet's many paintings of Rouen Cathedral.
The double layered façade provides the building with passive thermal protection. On the roof, the glass scales make way for solar panels that provide a considerable contribution to the building’s energy self-sufficiency. Manufactured in Europe, the panels are modern in design and provide varied nuances of colour while ensuring high energy yield.
The transparency and depth of the double façade enhance the variations of light and prevent the building from appearing overbearing. The building’s appearance transforms throughout the day. With the light shining through, it appears to float on the quay.
Under the impressionistic outer layer, the work spaces are arranged according to their use. The ground-floor reception area provides direct access to the floors above. The floor on the quay-level provides reception areas, meeting rooms, services and support activities. On the building's roof, the large terrace extends the reception areas and offers a panoramic view over the city and river.
The offices are spread over the floors and enjoy excellent lighting. A gap that stretches from top to bottom separates the building in two and brings natural light to the heart of the building. It widens to form patio spaces on certain floors, creating terraces accessible to visitors.
Designed with the aims of efficiency and comfort, the building is both innovative and exemplary in nature. Navigating your way through the building is easy and intuitive, and the emphasis is placed both on the work spaces and community areas.

3. You developed a humanistic vision for tomorrow’s cities. Please describe that vision and explain the importance to you.

My humanistic vision is a way that answers to the urgent question of what urban planning should be today. The urban culture developed in the 20th century is steadily expanding and over half the world's population now lives in cities, a proportion that is continually increasing and causing functional problems on an unprecedented scale. It is a situation that threatens our planet's resources as well as the way we live together in cities.
In the 21st century, hundreds of millions of people will find themselves living in an exclusively urban environment, an artificial universe in which technology will be omnipresent. The modernist city, placing emphasis on infrastructures and zoning, will deploy its ordinary, internationalist architecture throughout the planet and mass-produce urban worlds completely lacking in quality.
With the Sensual City, our intention is to develop an alternative approach, one in which technology is not obtrusive nor an end in itself. On the contrary, as technology is perfected it becomes invisible, it disappears from view and allows people to live in cities that can be construed as built landscapes, designed to offer a full sensorial experience. The city becomes an environment that incorporates a high level of sustainable development as well as a setting where people can take pleasure in living together and relate to its history as the founding source of civilization. To achieve these ends, it is essential that the city be deeply rooted to its specific culture, climate and geography.

4. What is the Sensual City Studio and what are its tasks?

Sensual City Studio (SCS) was founded with Pauline Marchetti and in association with the philosopher Philippe Simay and the architect Estefania Mompean. It is a laboratory of ideas, creation and urban foresight. It brings together a network of professionals from the worlds of art, architecture and urban planning, as well as the social sciences. Working at different levels, from design to urban planning, the studio analyses changes in architecture and large modern cities in order to predict the effect that they will have. SCS seeks to develop a sensitive, humanist approach to the city, combining sustainable development and new technologies in a quest for innovation and urban delight. The result is a preliminary analysis, procedure and stance which inform the architectural design process.

5. Where is your favourite spot in Paris, and abroad and why?

It is actually the Parisian suburb which is for me of great interest. Paris has a unique innovation problem. Out of nearly 12 million inhabitants, 2 million are packed into the inner city of Paris, within the ring road, in an old and increasingly tourist-centric city. The vast majority of its population, around 85%, live outside the city walls in more dynamic areas, but which struggle to achieve a metropolitan experience. That's where urban projects need to happen. Stretching out from the ring road and beyond, a new chapter in the city's story is waiting to be written. It requires drawing on ideas and talents to create a new urban landscape. By taking advantage of the diversity of contexts, a diversity negated by the severe stigmatisation of the word banlieue ('suburbs'), we can create a metropolis where city life is not the unifying theme. In just a few years, the new Express metro network will turn Greater Paris into an urban 'archipelago'. But we can’t stop there, we have to initiate transformations that will profoundly change our perception and experience. No longer export the historic Parisian Haussmannian model, but rather invent it.
Furthermore, abroad, Asian cities and especially Shanghai are for me think tanks. My work in China forms part of a universe of mutual influences. My approach is based on a continuous dialogue on creation between two continents that is as old as Marco Polos travels. The East has always influenced the West, whether in the domains of art, philosophy or literature. And, indeed, China was the source for the the idea of the sensual city, a theme I am currently developing in a number of projects in France. All of our projects in China, such as the French International School of Beijing designed with Pauline Marchetti, seek to establish close links between architecture and the landscape. It is with the collaboration and assistance of Michel Hoessler, from Agence TER, that we are currently reflecting upon a new means of producing the city that avoids the pitfalls of the efficient but soulless 'infrastructure city'. The urgency of the question of how to build our cities always tends to lead to a bias in favour of the easiest solutions: an umpteenth version of the ideal functionalist city, about which nothing new can be said, hopeless in its monotony. We, on the other hand – by respecting topography and existing routes and channels, and by making use of local species and materials – aim to imagine a contemporary, contextual city that will create a prospective counterpoint in the frenetic urban extension that characterizes China today.

" ... develop a sensitive, humanist approach to the city, combining sustainable development and new technologies in a quest for innovation and urban delight."

Jacques Ferrier Born 1959. Architect and urban planner. Following his architectural training at the École Nationale Supérieure d’Architecture de Paris-Belleville and the École Centrale de Paris, he created his own architecture firm in Paris in 1993. His portfolio includes cultural and leisure facilities (such as the France Pavilion for Expo 2010 Shanghai and water park Aqualagon in Villages Nature Paris), showcase buildings (head office of Champagnes Piper & Charles Heidsieck in Reims, the head office of publishers Hachette Livre in Vanves near Paris and the Airbus Delivery Centre in Toulouse), public buildings (notably the Collège de France in Paris, headquarters of Metropole Rouen Normandie and the French International School of Beijing). In 2010, Jacques Ferrier and Pauline Marchetti created the Sensual City Studio, a research laboratory devoted to a forward-looking, humanistic and sensitive approach to the city and architecture. His humanistic vision for tomorrow’s cities finds its full expression in the concept of the Sensual City, which seeks to answer the question of what urban design and planning should today be. His architectural work has been the subject of many publications in France and abroad and has been the recipient of a number of international awards.